I ended up taking the weekend of from running.  It wasn’t the plan but hey, the name fits.   On Saturday, I worked then napped then hit the movies to see the new Avengers.  Awesome!  I planned on running Sunday but I started a spring cleaning project that just grew and snowballed as the day went on.  Suddenly it was almost Sunday dinner time and I hadn’t run yet.  Oops!  In other news, I have way too many pairs of running shorts.  And pants.

Monday rolled around and I was looking forward to running.  I want to transition to running 3x a week, Monday through Friday as opposed to 2x.   So this week is my first attempt.  Monday running just seems so hard to me, I don’t know why.  I did it a few times during my training cycle but it was usually only because I had other conflicts I couldn’t reschedule.    Instead of feeling fresh and ready to run, my legs just felt super heavy.    That actually wasn’t horrible.  What really irritated me was the wind and the thousands upon thousands of gnats.

We kind of skipped winter and the warmer weather (then) had brought a gazillion gnats.  There are hordes of them around the lake path.   I’ve mentioned it before but seriously it’s nasty.    I alternate between flailing my arms around my face and blowing air out of my mouth or nose.  I refuse to swallow a bug!  I also think of the X-Files every single time.  Anyone ever see that episode with the loggers in the forest from like first or second season?  Where the creepy gnat-like bugs come out of the tree rings and web people in killing them?  Blech.  I think of that every single time.

Now for the elephant run.  I think I’ve posted this before, but what is an elephant run?  This is what I call these runs where things just feel off.  Not a little off, a whole lot off.  Like you feel more like a circus performer flailing about the street than anything remotely resembling a runner.   It has nothing to do with pace, sometimes these runs are slow and sometimes they can be speedy.   Most often I can hear my feet pounding the pavement and I sound heavy footed.   Normally, you can barely hear my feet. 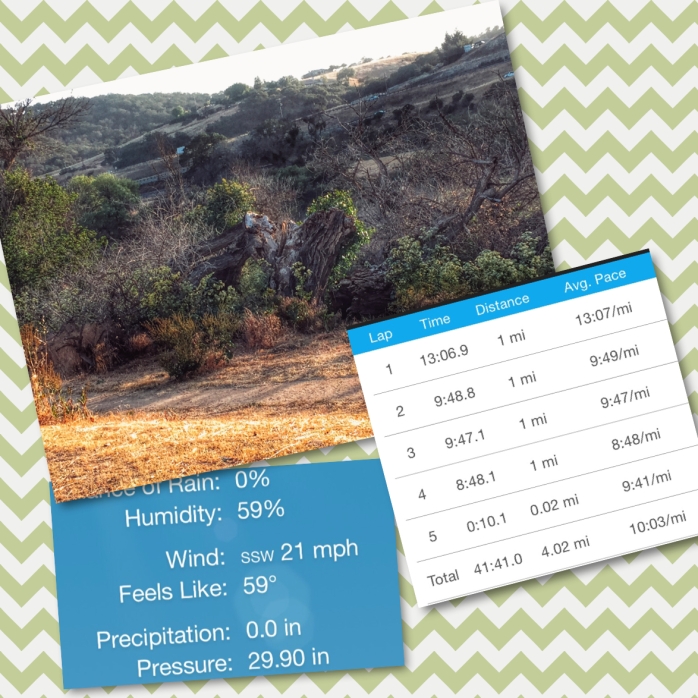 I felt like my left ankle was dropping in, my right knee and lower leg felt all off kilter, like they were swinging out.  My shorts which I have run in at least 1x a week for the last year suddenly kept trying to turn into underwear.  My shirt was riding up under my long sleeved layer.     I kept hitting the headphone cord and pulling them loose.  I stopped every mile to fix some wardrobe malfunction or another.   Oh and the wind!   The last two miles were straight into a headwind.  Ugh.   I think winter’s cousin stopped by for a visit…in May!   Temps have been in the 50’s and the wind has been ridiculous for weeks.  Yes, everyone back east can shake your head an laugh at me.   I have run in pants more in the last month then all winter.   Which is a annoying since I just put all my “winter” stuff away.   20-30 mph winds just need to stop.   I don’t even like driving in them.  😦

To further add to my elephant running, I crossed paths with another runner on my way back down the hill.  I felt like an ungainly mess and was just getting irritated with everything, and here comes this shirtless Adonis running my way making it look effortless.  Come on!   Actually I have no idea what he looked like.  I was running into the sun and he was slightly in the shade.  So all I know is that he was male and shirtless.   Apparently he wasn’t cold like the rest of us out there.    🙂

They weren’t pretty runs but I got them done.   🙂    That’s what counts right?     I took today off since my legs felt so odd yesterday.  This 3x during the week is going a little work to get used to.

Ever had an elephant run? Or something of the sort?

Has the urge to spring clean hit you yet?

Is it possible to have too many pairs of shorts?   🙂