Oh boy was I in a funk last week. I was cranky and moody and just kind of blah.

I kind of crawled into a hole and became an antisocial whiner.  Which is probably better than inflicting my crankiness on all of you but either way it wasn’t a great week.  The odd thing was that I didn’t have a solid reason for the crankiness, I just was in a funk and had to ride it out.    I was hoping I could run out some of that moodiness but that didn’t exactly happen during the week either.  Dude, someone give me a pizza.

I had an ultrasound and chest x-ray on Wednesday to see if that can help figure what is going on with the weird side pain I’ve been having.  Now to wait for the results.

Monday- Rest  I wanted to run but I also thought it might be best to my legs a rest after the weekend of running.    The only thing that’s keeping me from freaking out about my lower mileage this training cycle is that I am stacking my longest runs on Saturdays and Sundays, which outside of my Hanson’s attempt last marathon training cycle is not something I do.   I also haven’t been doing my PT exercises as they aggravate the side/flank pain so I figured rest would be best.

Tuesday- Rest  Should have run but the sudden drop in temp and the 20+ mph winds turned me into a big baby.    Where the hell did that come from?  The funk was also beginning to settle in.

Wednesday- 2 miles  This was supposed to be 4.  I mentally needed 4 because I was just super cranky for no reason at all.  I changed and headed out after work and immediately felt like a vice was wrapped around my left leg right above the knee.  Grrrr.  By a mile in, it hadn’t loosened up at all and actually felt tighter so I turned around and headed back for the car.   That was not the head clearing run I was hoping for and now I had another reason to be moody.

Thursday- Rest The day before had kind of scared me.  Should I run or shouldn’t I?

Friday- Rest Overslept, was running late but made it to work on time.  My side/flank was hurting more than it had all week so that wasn’t cool. 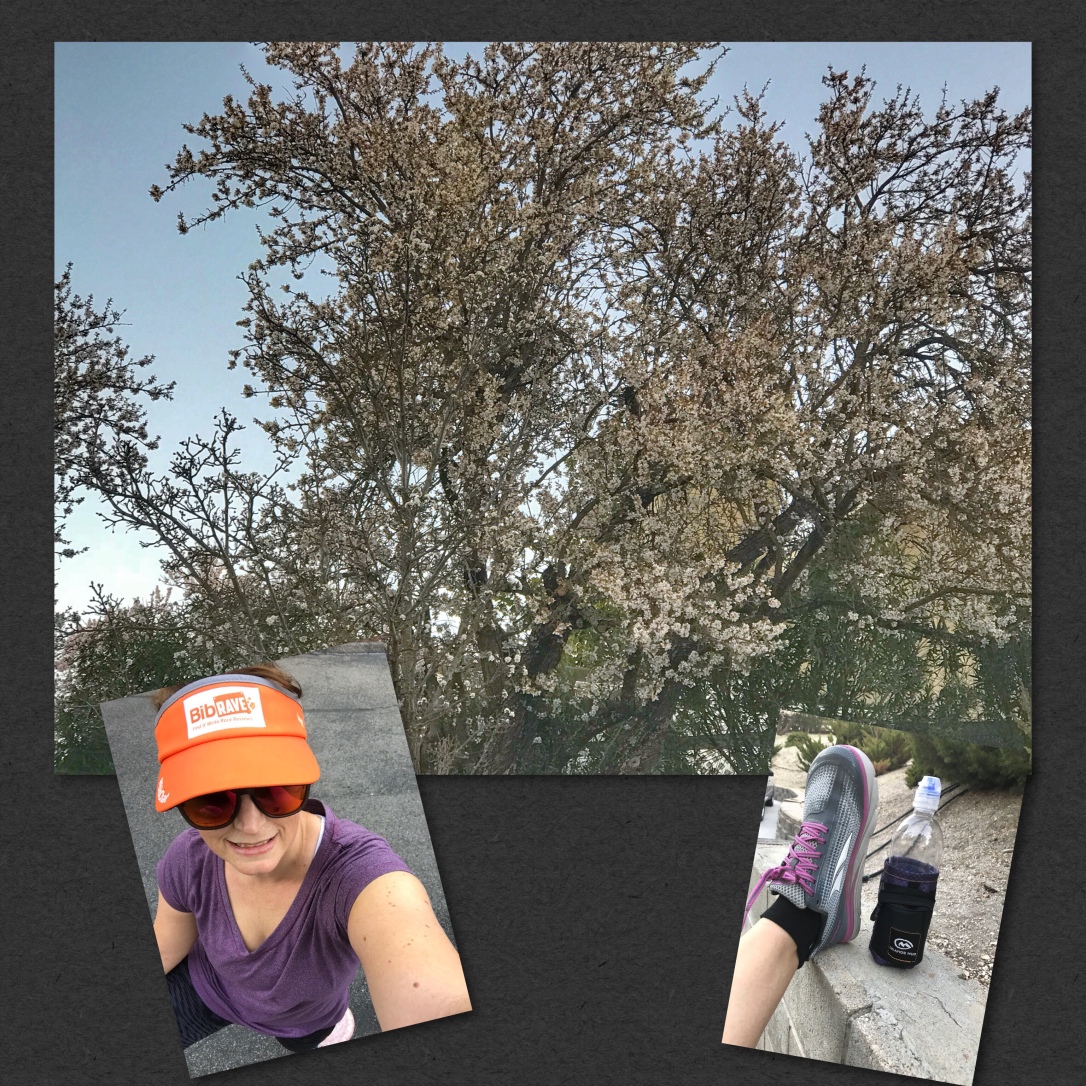 Saturday- 6.2 miles I headed out late in the afternoon for 6-7 miles hoping that my leg and my side would cooperate.  Surprisingly they both did.  My leg felt tight in the beginning but loosened up fairly quickly.    The temp was pretty perfect and I was feeling pretty good and I ended up negative splitting the run.  If I hadn’t waited so long I may have tried to turn this into my long run but I ran into dusk and I had no lights and very little reflective gear with me.

I could tell that my hips and back really needed help though so I decided to try my PT exercises that night.

Sunday-13.1 miles  Maybe it was the PT, maybe it was something else, but my side hurt the most it has in weeks.  I pushed my run back into the afternoon.  My plan called for 15 but I knew I was going to be slow and I was doubting I would even clear 6.  I started out and kept to my run/walk intervals figuring that was the best idea for this run.   Mentally, I wanted to quit at mile 2 but there was no physical reason to so I just kept trucking on.   I had to make a bathroom stop around mile 8, seriously, an aside to my city- what the hell?!?!!   I would imagine prisons have better bathrooms!  There is one park that has open bathrooms and they are creepy and disgusting, I even used the ones at the front of the park instead of the back this time and they are still gross.  But hey at least the stalls had doors this time!

Once leaving the bathrooms, I decided it was time for music and turned on my headphones.  However even with the added motivation, I knew I wasn’t going to hit 15.  Between the slower pace, the bathroom break, the stop lights and the pause to take off my outer layer then stash it, almost getting hit by a car not looking when they turned right, I’d been out there almost 3 hours!  I don’t think I’ve ever seen that much non-moving time on my Garmin before.  😛   I called it at 13.1.  Far better than I thought I was going to get.

21.36 miles for the week.  Pretty similar to last week and at least my long run went up.   I really need to work on building back up the weekly miles again.

I really have to go back over these posts, I think I am a week off somewhere.  I shouldn’t be on week 16 until next Sunday.   Hmmm, maybe I can’t count?

If you read Thursday’s post, you know I got a little emotional last week.   I’m still feeling a out of sorts but I’m going to just keep smiling and fake it til I make it.  Thank you to everyone who commented.  🙂

Harvest Marathon meeting.  Where did the time go?  Race day is only a month away?  Well, crap that’s soon.   Unfortunately numbers are down.  I’ve noticed that at a lot of races this year.   I run a lot of the same races and they all seem smaller this year.  Has anyone else noticed that?

I really wasn’t feeling a run.  I couldn’t really pinpoint why so I made myself change into my running gear.  I headed to the river path for an easy run.    My mother texted me as I parked and I was hopeful she wanted to meet for dinner and I could ignore the run.  I was half right.  She did want to meet for dinner but was still at a tennis match.  So I went running.    Despite my weird funk it was a pretty solid run.   It started out slow with a nice progression to a faster finish.   I fit in 3.8 miles before I went to meet her.

Today was rough.   I think the bad news about the potential job was the final push and I got a little emotional.   At least I made the right choice that night and turned to exercise instead of food.  My legs felt a little rubbery when I was done with those miles.   😄

Once again, I just wasn’t feeling my run.  The plan called for speed work but I was having troubles talking myself into even running 2 miles.  I headed back to the river path and just figured I would run whatever my head wanted to.  I kept it easy and tried to just shut my brain up.   I don’t know how well it worked but I feel like it was a solid set of miles.  While our temps have been very un-fall like- we have had some amazing sunsets.  It’s hard to be mad when you see this-

More like chaos.  Due to some scheduling issues and a late summer illness, there was only myself and 2 other people at work.    Being down 50% of your crew is painful.  I knew we could do it, but there were some logistical issues that had me concerned.    We did get a some help from other locations for portions of the day and thankfully it was a slightly slower than normal Friday.    We got through the day and I have never been so glad to close the doors.   😖 But hey a customer told me I had an amazing attitude so score!

I planned to ride the bike but I was so damn tired I chose a nap instead.  Wish it could have been longer.   I also worked the registration table for my favorite race of the year.  HOB Fun Run!    This was the first race I’d ever run.  And it turns out it was 5 years ago Saturday and this showed up on my Timehop-
Sunday- 10K and 5K

I love this event but it does stress me out.  It’s a race where I am guaranteed to know a ton of people.  Performance anxiety!!!!  Plus the last two years we’ve had a running team with matching shirts.  You can’t hide when you’re wearing matching clothes.  😉  Race recap will be up Wednesday. 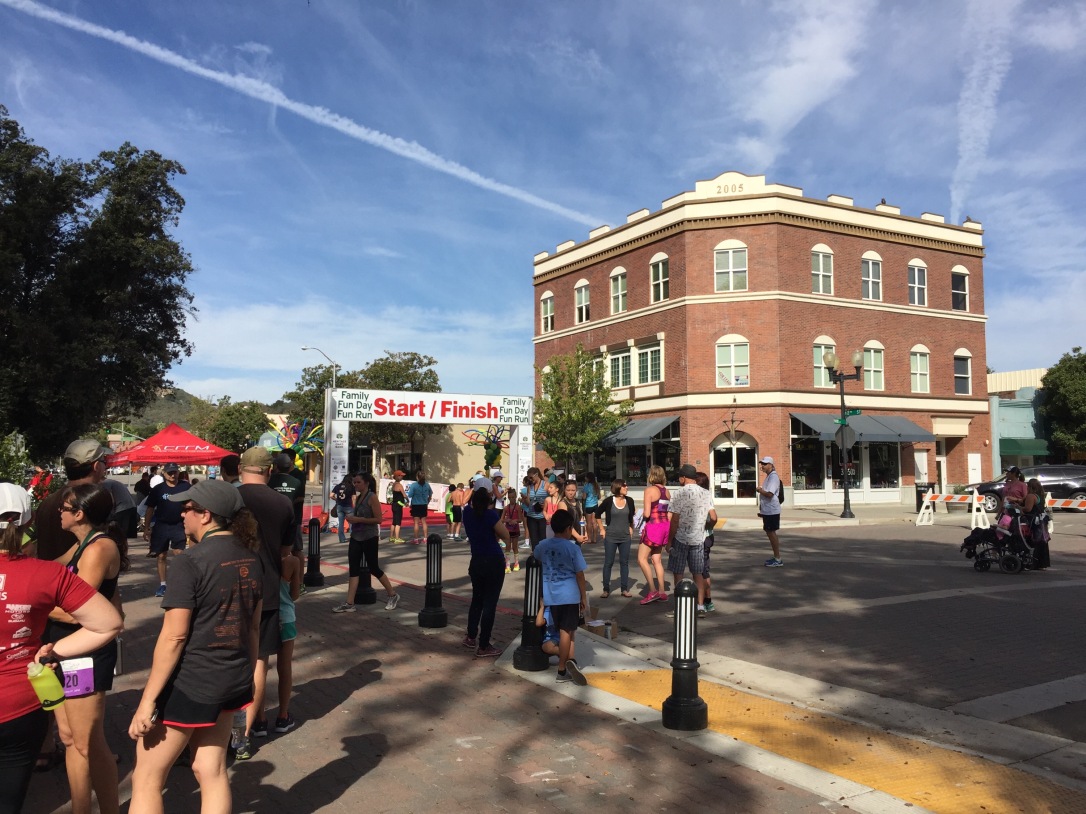 Oddly enough, for a week when running was the last thing I felt like doing, I turned in one of my highest mileage weeks in months.  Which is partially cool and partially sad because I would love to see a higher number.    But it is what it is.  Despite my funk, I feel like they were all solid miles and solid miles help build a stronger runner.   Right? Can’t complain about solid miles.

Paleo–  Oh hell, I don’t even want to grade myself.  Lunch and breakfast were still good but other choices were not.  Let’s just say donuts and pizza happened.  Way more often than they should have.   Oddly enough it was my nice healthy salads that made me feel sick.   I’ve been experimenting with various types of lettuce and some are not winners.    But now I know I can add kale to the list of things I can’t eat.     I’d never eaten it before so luckily it’s not something I’ll miss.

So yes, last week was rough but I am going to try to look on the bright side.   I got all my miles in plus a solid cross training workout.   I had a fun (busy) weekend and got to see a bunch of people.    Oh and I dyed my hair again.  😏   My boss is back this week- woo hoo!- and I am looking forward to a weekend of nothing.   And then taper!  Or am I in taper now?  How did I mess up my damn race plan so much?