All right let’s get to another episode of Confessions of a Chaotic Runner.  Though I tried to ignore it and live in denial, by Thursday I knew I had a problem.   When I had to put a customer on hold and pass the phone to coworker and excuse myself to run the restroom, there was probably something wrong.    Problem is, I am so used to my stomach being an asshat on the daily due to my GI disorder that it was easy to lie myself about it being something else.  I didn’t want to admit I had the  weird bug going round.  By Friday,  I was coughing, bleary eyed, and just walking from my desk to the copier was exhausting.  But I was still planning on a long run! Runners are crazy.  My coworker told me I looked like her 5 year old- running a fever and ill but trying to convince her to take me to McDonald’s.  Hmmm…accurate. 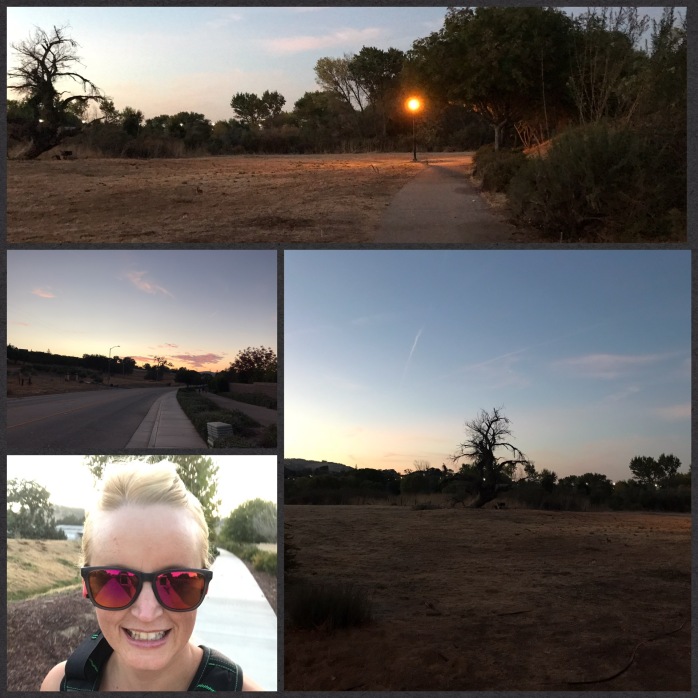 Monday- 3 miles Fairly, steady paced twilight miles.  That will be the last venture into the actual river portion of the trail in the dark though.   The most horrific, blood curdling scream rent the air just 1/2 mile from my car.  WTH?   What way do I go?  I took the shortest path back to the street only to discover the source of the scream was a child throwing a tantrum at having to leave the park.  Lady- hire your kid out for horror flicks.

Tuesday- Rest  I am sure I did something else but I can’t remember what it was.  Oh yes, the stomach troubles really started but I ignored them.

Wednesday- 2.3 miles Short easy miles as I was back at the lake and I will not run into twilight there due to previous creepy situations.   But I got to enjoy a pretty good sunset.

Thursday- Rest  I was feeling poorly but still refusing to admit that I was sick.  I did let the registration window for a potential #29 close though- Ventura- so I wasn’t being completely stupid.

Friday- Sick I was still in denial.  I took running clothes to work.  Halfway through the day I finally admitted that I shouldn’t even be at work let alone running.    But I forced myself to get through the day.

Saturday- Rest Other than running some errands, not a whole lot happened.  I kept talking about running like it was going to happen but even I knew that would have been stupid.

Sunday- 5.25 miles Not sure if I would call that a long run but it’s the longest run I pulled off this week.  I set an alarm for the morning but at some point in the night I must have turned it off.  😒  I still felt touch and go all day but I decided to attempt a run in the early afternoon.   I maybe should have chosen a route with less hills.   I wish it had been a little cooler than 80.  I sat down on a wall at mile 4 because I wasn’t sure I was going to be able to finish the last mile.  But I kind of had to as I had to get home.   😛

10.55 miles for the week.  Kind of crappy but considering half the week was spent fighting some crappy stomach bug, I’ll take it with little complaint.  I’ll save that for another week.

Tell me about your amazing running!

When you barely run, you only have yourself to blame for why it’s so hard.
I got granny’ed!! 😂😂
7 years ago and probably 50lbs lighter, this trail kicked my ass.
For a person who feels like they barely run, I sure buy a lot of shoes.😂
I’m one of those people who hates empty walls…
Sunday long run, beach run.