If I had one word to describe this week, it would be- pain.

I think I watched more stupid movies than ever before.  Netflix shamed me with “are you still watching” a few times.  😛I kind of buried myself in a dark hole, I was barely even paying attention to those movies, I just needed background noise (there were some good ones though).

Monday- 2.5 miles
I was looking forward to my run after work.  I thought I had 5 miles on the plan -oops – but I was on board with that.  The bottom half of me apparently was not.  Right from my first few steps, things felt off.  My legs hurt- not just sore but hurt.  I walked the first half mile hoping they would loosen up but no luck.  I tried running and it felt like the pain was deep in my bones.  WTH?  A little over a mile in, I stopped to try and stretch it out and almost screamed.   It hurt from my hips to my knees but in the bones.  I turned around and hobbled back to the car.     I didn’t know what was going on but it wasn’t worth risking an injury.

Tuesday- Liift4
My legs were still not right so I focused on my form and modified anything that required any jumping. I kind of do that anyway as I know my limitations but I really did it now.

Wednesday- Liift4
I drove to the lake path to run.  I had changed, I had my pack in my lap but I wasn’t feeling it.  Like deep down, really NOT feeling it.   I’m not a believer in there are no bad runs.  Yes, there are.   The times in the past that I have forced myself to run when I feel that against it I have either hurt myself or broken a piece of running gear.  I drove away without running but I wasn’t completely lazy.

Thursday- Migraine
Bring on the pain.  I woke up to the oncoming pain but hoped it would ease up.  Both because I had an early morning meeting and because I wanted to run after work.   I finally admitted defeat around 11:30 and did something I rarely do- I went home sick.  Then I spent the rest of the day napping, watching movies and alternating between being too hot or too cold.

Friday-Liift4 ish
I still had a migraine but I made it through work.  I attempted Liift4 in the evening but I only pulled off the lifting portion.  When it transitioned to the HIIT work, I tried one move and was like, umm, not happening. 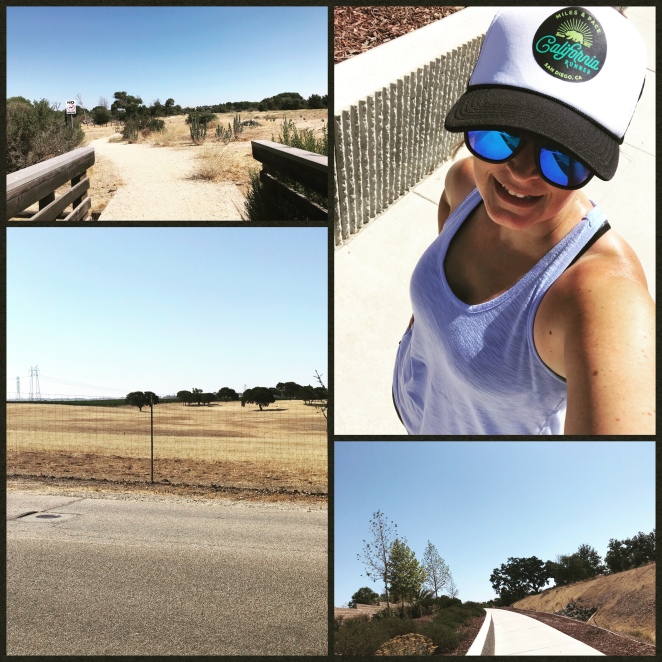 Saturday-8 miles
Maybe it was the migraine that was still around but this was the hottest 8 miles of my life.  In hindsight, I maybe shouldn’t have tried for my long run after 2 days of pain.   I started my run around 9:15 and while that is early for me; it was already hot.   Miles 1 and 2 were good and I was optimistic.  I slowed during mile 3 but I was also entering the section I lovingly call the “surface of the sun” so that was to be expected.  However mile 4 went south.   It got super warm, I was too hot, I was feeling dehydrated and I almost threw up.    I was almost out of water and I was only 4 miles in.  I rerouted back to my car but I had slowed to a shuffle.  I refilled at my car and sat there a bit as it was fully in the shade.  By then I needed less than 2 miles so I dumped my pack thinking running without it would be cooler and just shoved my phone in a pocket and carried a water bottle and my pepper spray.  I then looped the river trail and the neighborhood until I hit 8.   This route needs some shade!

Sunday- Rest
I may have gotten in my long run but I was kind of broken the rest of the weekend.  Not only did the migraine not go away, it was a little pissed at me after those 8 miles.  The most strenuous thing I did on Sunday was clean my car.  Except it was so dirty, that really was a workout.